I grew up the daughter of a career naval officer. 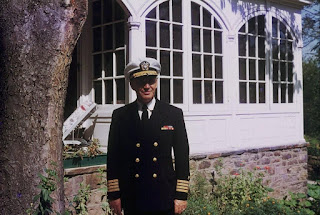 We lived in various places around the country. I was  very interested in history, and majored in it in college and later got a doctorate in American history. As a child I did embroidery,  but little other sewing.  When I was older I made clothing for myself.
I got interested in quilting during the 1970's. when I found an article in a woman's magazine maybe Good Housekeeping. The article featured using up those long strings of polyester double knit left over from making slacks, and those run panty hose.  You were to cut out 4 inch squares from the double knit, sew them together leaving an opening to insert the run pantyhose, whip the square shut, and tie with a yarn  tie.  Then you sewed the squares together to make a heavy ugly "quilt." It was the only quilt I ever sold, as a guy bought it at my garage sale to line the bottom of his pick up truck.
In the 70's most quilts were quilted by hand in  a large frame. I didn't have a frame, and I still wanted to make quilts, so I tried quilt as you go.  It was a disaster--where I joined the blocks became large lumps.  I finally bought a handmade quilt frame, and I decided to make a dinosaur quilt for my son, who was then 4.  I went to the library and took our children's books with pictures of dinosaurs which I traced. I used the tracings as patterns. Scott wanted dinosaurs fighting cave men, but that would not be historically correct. The first bloc showed a dinosaur emerging from his egg.  I made blocks representing the different dinosaurs, and one that showed a dinosaur expiring.  The next blocks showed the saber tooth tiger, then cavemen fighting a cave bear, and finally the cave men doing cave paintings. The picture isn't very good, as I didn't have a good camera then.
Anyway, now I was on my way.  I've made bout 70 bed quilts since then, some from published patterns, but a lot of my own designs. 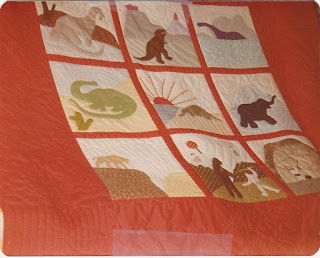 Posted by rothequilter at 1:20 PM No comments:

I got interested in doing art quilts when I happened upon Pamela Allen's website.  I loved everything about her work--the whimsical character ad  the hand sewing.  I didn't like to machine piece or machine quilt.  When I found out she would be teaching at Asilomar in 2009, I signed up and went. She taught us her manner of constructing quilts, beginning with the backing on the bottom, followed by batting, and finally the fabric used to make the picture. The fabric was sewed down using embroidery floss.  This is one of the quilts I made at Asilomar.  It's called the Eye of the Whale.  She gave me a scrap of fabric (the red, black, yellow, and blue). Then I had to construct a small piece filling in with other fabric and embroidery. 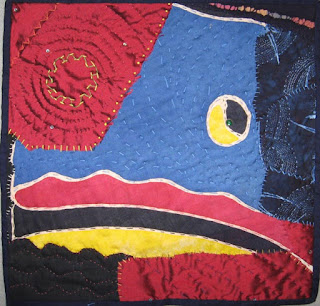 I still use her method today. I have taken several courses from her, mostly online.
The second teacher who has inspired me is Jude Hill.  Again there is a lot of hand sewing and whimsy.  She also taught me how to weave fabric to use as a base. I took a lot of online classes from her (now these  classes are online for free). 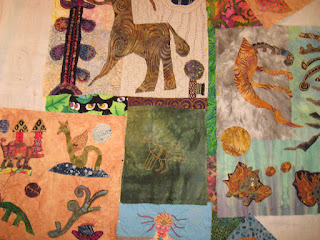 The last teacher I wanted to recognize is Luann Rimel. She goes to old cemeteries and takes pictures of the statues, which she later transfers to fabric.  I made this piece in honor of my maternal ancestry. The old gentleman is my great great (or maybe another great) grandfather who was a tailor from Ireland. As Luanne recommended, I used old linens (in this case linen napkins) to mount the pictures on.
With my 3 teacher's help I was off to art quilting!

Several years ago my guild, Bits N Pieces formed an art quilt group. I've been a member for several years. I will miss this group when my husband and I move to Overland Park Kansas. We meet monthly to share ideas, get feedback, and assistance with our projects. We also work on challenges. We had a literary challenge--choose a poem, book or a movie title and interpret it in cloth. I chose a book that I have enjoyed for years, Platero and I. Another challenge involved choosing a work of art to interpret. I used Renoir's Dancing at Bougival. 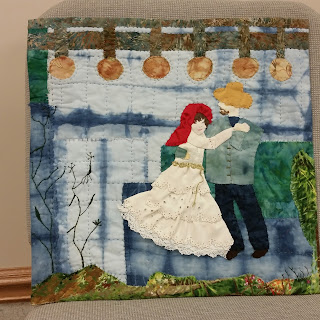 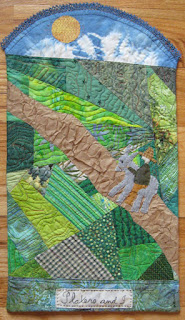 Posted by rothequilter at 7:45 PM No comments:

A tribute to my ancestor

I wanted to do a piece honoring my Fourth great grandfather, who served eight years during the American Revolution. He was only 18 when he enlisted. He was from Stratham, NH. He was at the seige of Boston. His unit headed toward Quebec, but joined the retreating American army as they fled down Lake George. He was at the Battle of Saratoga, and spent the winter with Washington's army at Valley Forge. He  fought at Monmouth, NJ, and finally he was present at Yorktown. He received the Badge of Merit, whose design was later used for the Purple Heart. He received  pension, and a letter of commendation from Washington. He lived to be 82.
My piece illustrates his life. 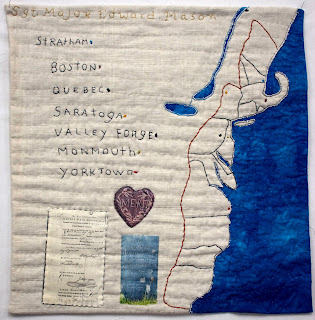 Posted by rothequilter at 1:00 PM No comments:

It's been a while since I posted. My husband and I are moving to Overland Park Ks to a senior living facility. We will be near our daughter and our twin granddaughters. Ron has developed Parkinsinism . There is no family in St. Louis to help, so we are moving closer to our daughter.
This fall we celebrated 50 years of marriage. I made a piece with our high school pictures and the high school pictures of our children and our four grandchildren. The gold thread represents the fifty years. I'm going to try to post more. Since we are moving and most of the work of sorting out stuff has fallen to me, I haven't had much time or energy to devote to my fiber art. I also made a piece celebrating my maternal genealogy.

My maternal ancestors came from Ireland, especially County Mayo. This piece has three sections: Ireland, Macclesfield, England, and Holyoke, Massachusetts.  I made an Irish cottage, and an embroidered family leaving Ireland. My great great grandfather was a tailor. I have his shears, and I used a photo of the shears in all three panels. My son spent his honeymoon in Ireland, and I used two of his pictures of ruins, and another of an altar screen. Family legend holds that Michael earned money making uniforms for members in the workhouse. The Welch family left Ireland in 1849 during the potato famine. There is a  picture of Michael in the upper right hand corner, and an appliqued piece of the workhouse.
The family stayed in England for ten years, where two of the daughters, including my great grandmother, worked in the mills. I found a picture of girls working in a mill that I placed on a dyed piece of crochet. I also appliqued a picture of a mill.  The family lived on Derby street which I pictured on the piece, I also mounted picture of my great grandparents, Mary Welch and Thomas Doyle, and included their marriage registry and St Albans, the church where they were married.

The last panel shows their life in America. They traveled on the Tarifa and settled on Holyoke. My grandmother was born in Macclesfield, but she always said she was Irish. There are some pictures of my grandparents, Maggie and John Eagan. They had a general store, which I pictured. I mounted a scrap of fabric and what was left of her silk pincushion. I cut a piece from an embroidery. I also show my mother, pictured with Michael Welch, in her nightie, and at Nantaskett Beach, where her family owned hotels, until the went broke in the late 1920's.I used a book by Maggie Grey, Long Diaries Tall Tales for inspiration.
. 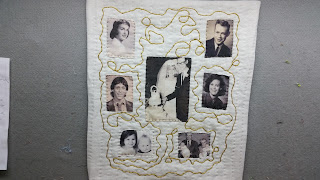 Posted by rothequilter at 12:36 PM No comments:

This piece is part of me English series. It is titled Marketplace at Stonehenge. I used purchased hand dyed fabric. and hand appliqued and embroidery. I made a triptych. It hangs in my kitchen.

Posted by rothequilter at 4:05 PM No comments:

I have four grandchildren, and I have made them all baby quilts. On the quiltart web there was recently a discussion about whether baby quilts should be simple. Mine aren't--I couldn't resist making them special. My oldest grandchilren now 11, are twin girls. My daughter lived in a rented house, and requested quilts to hang on the walls. I made Rosie a sesame street quilt, and Caroline a quilt featuring my daughter's favorite books. Four both quilts I used settings based on some Japanese quilts I had seen, as I didn't want them to have rows of pictures. This design allowed me to fill in the blank spots with some jazzy material. 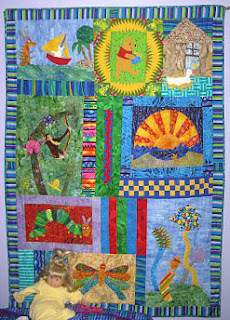 Since these were wall decorations, I felt they needed quilts to drag around. Rosie loved bunnies, and Caroline loved ducks. Here are their drag around quilts: 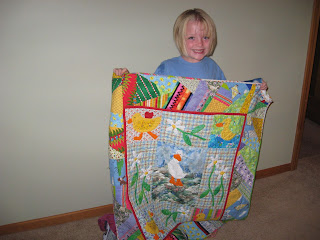 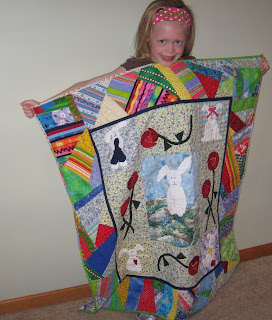 When my son had a daughter, I decided to make a quilt based on The Cow jumped over the Moon. I used the house they were living in at the time, and added their two pugs. Murphy, the black one, has  only has one eye, and Maggie has a Gene Simmons' tongue: 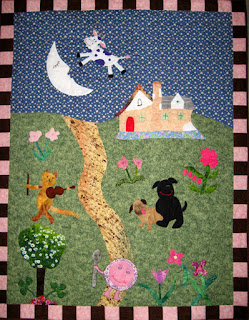 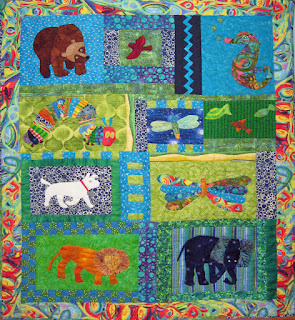 A few years later my son had a boy, Sean. His parents requested Eric Carle quilt. I didn't use preprinted material for Sean's quilt; I created the images myself.
I have made all four grandchildren bed quilts and Christmas quilts, using my own designs.
Rosemary Hopkins

Posted by rothequilter at 9:06 AM 5 comments: